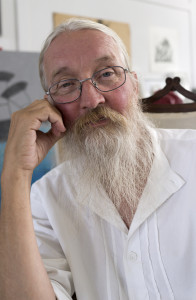 Falko has lived and created in Eckernfoerde for thirty years. What does he try to convey by „Free“ and „Art“?

As an artisan Falko plays with possibilities. His Art unfolds, not in simplistic normality’s sheltering itself as in our daily race for life, luck and consumer wealth.

The artistic tittle-tattle of galleries and patrons interests him as little as the compulsive non-uniformities of the other players.

Nevertheless he does not mobilize art to use us as spectators or players. Falko searches and finds the understanding of the consumers for his work without communicating the feeling that they are being used seif gratification

Falko is in one, designer, aesthetic adviser, teacher, actor, organiser, curator, cook and presenter. This not a list of cheap showmanship, he only does that which he can. He is confident of his capabilities, in that what he does, giving others pleasure, is an endorsement and enrichment, Windhaus remains true to himself.

In his work as a painter for several decades he has established that by continually using new materials and techniques in a playful and skilful way he allows us to play, to explore, for us also to discover new frames and references in his work.

Where does he find this abundance of feelings, expressions and strengths? Windhaus looks into the spaces between us, in ourselves and those appearing in our counterpart.

Not only patience is needed and a stoical enthusiasm for detail, for the human tauch, but also intuition to discover the great and grand, to feel and to translate into form. Falko is able to differentiate between the common, the unsavoury and embarrassing between humans and their neighbours and friends, the passers-by and seekers of help, the intruder and the idiot, the clever and wise, the great and the uplifting, he can place them in scenarios where we, as the viewers can see them and let them affect our emotions for good or for worse, or not!

His art covers all accessible domains; in his arrangements in the Galerie 66 the presence of dinner and cooking events or his design configurations are neither arbitrary nor intrusive. They are more subtle than offending; Windhaus understands how to go under the skin, but to be neither cheaply popular nor optional. He has never forgotten how he reached his present position.

He has related how lucky he was to have been born after the War, discouraged by school, ill at ease and hurt he fled his secondary school and became a restorer. An artisan, which he remains today, an artist, Falko learnt his trade as a craftsman. Even as a child he watched and assisted an established and respected painter who enthusiastically guided the young and enquiring young man. His aptitude focused on the reconstruction of what others had made; something must be brought back to life!

Technical Colleges for design and visual communication followed, in his words because of the ample scope of learning and latitude offered. As we know today he learnt a great amount, his skill and virtuosity, his capability of expanding and developing space: Composition, colour, space, form, brushstrokes, these are Falkos‘ concepts, his room.

For an artist this would be nothing without the suffering, the madness that Humanity inflicts on itself and its surroundings, between us, around us and in us. Falko seizes in his works on Hope and understands how to convey it, albeit in forms of translucency, sometimes gleaming, but always understandable.

His art consists to see us as we are, to relive and translate his impressions and opinions in pictures, objects and artifacts to return to us. And there, as he believes the upraised index finger is only to be used in the kitchen, he leaves us to decide how we should treat his work and art.

Falko paints and sketches, creates objects, arranges house fronts and spaces both inside and outside, designs posters, book covers, bindings and packaging.

He plans and organizes music productions and readings.

He teaches children, students and adults and gives advice for arrangements.

Apart from these activities he is the manager of the BSI Campus with ties to the BSIC and international art connections How could someone who came to Eckernfoerde thirty years ago only wanting to be an artist stay? What kept him here, made him linger?

ls it rapture for our willful but still friendly scenery overlooking the sea?

Not long ago Wilhelm Lehmann called Eckernfoerde „the Adriatic pearl on the sea“.

Certainly in the last thirty years the variety of creatures in the coastal regions has decreased but it is still there. Children, if they still visit the beach can still find one or two starfish or collect jelly fish and bury them as fifty years ago. From the family seaside resort that Falke never knew came a tripper’s goal full of excited short stay visitors shopping and buying at the fish market. Nevertheless it still remains Eckernfoerde, home.

Situated between the Noor and the bay, a virtual peninsular with the stolid persistency of its old town and the integrated neighbor, Borby Windhaus found his bachelor life, modest but comfortable. From there he could wend his way gently through the town to the Campus.

Why did he go there?

Falko Windhaus apart from his continuing artistic work has brought life to the Galerie 66. In the sixties Professor Zech brought the Galerie, then on the „Bauschule“ campus to over regional prominence. With a carefully chosen selection of talented artists from outside the region he took part in decisions deciding the cultural life of Schleswig-Holstein. The Zech

family allowed Falke to revive the name. Today, as curator, he has achieved the target of making the Galerie a cultural meeting place. His initiative in starting and planning exhibitions of artists from Germany

,Korea, China, Russia and in the future many other countries mirrors his enthusiasm for the sentence,

Professionalism is for him a pleasurable, stylish bur persistent companion. The matter must add up! As in his art, his works, planned and produced presentations, exhibitions and memoranda always show a complete lack of superiiciality and arbitrariness. This can be confirmed by placing the posters produced over the last decades next to each other. He has achieved the point where his colours, shapes and message are the only confirmation we need. Conversely we must wait a pregnant moment to see the next artistic vitality. Yes, he lives hopefully long in our small town that has become with and through Falko Windhaus a „free art“ town

lt is too early for a monument but think about what it would be like if the man in white had driven by. Unimaginable, Eckernfoerde would have been different. Some definitive impression would be missing.

Falko has learnt how to direct, to play with personal relationships and to influence people. Nobody can bar us from congratulating him even in his lifetime but the best way is to visit his exhibitions and tell him of our reactions, what we see, what we feel and voice openly our comments.